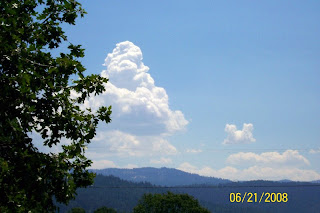 The lapse rate was good and the winds aloft fairly light, so it looked like it was going to be a good weekend. We had a lot of pilots and it was nice to have some friends & family to help with retrieves. The tasks both days were ambitious but the flying was very good. I met Dave S. at the school & he stayed in the camper with me. I flew 8.5 hours in two flights and Dave flew over 9!

Saturday the task was a 77 kilometer task 3 valley crossings and then a 53k leg to Exeter out in the San Juaquin Valley. I flew much of the last half of the task with 'Kansas' and we traded leads as we picked our way down the foothills. Eventually I caught a thermal that provided sufficient glide to get to Colvin Mtn. out North of Woodlake. This hill has some significance for me since it was the first hill I launched off of and thermalled in a paraglider, 5 years ago. A buddy of mine lives at the base of this hill. I spent 15 minutes or so trying to get a climb but nothing substantial cycled up the hill so I ended my 4:30 flight. 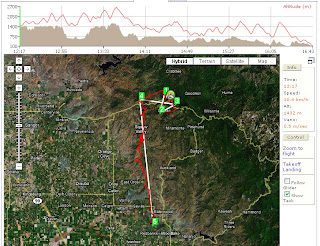 I figured Dan & Denise would have beer in the fridge & be willing to give me a lift to where the retrieval car could pick me up. Nobody was home. Bugger! So now with thoughts of a cold beer dashed, I started my hike out to the main road, three miles away. Did I mention that it was around 100F with no shade? I drank over a gallon of water and still got severely dehydrated. Fortunately a good samaritan gave me a ride to Ivanhoe where I met up with Dave & Kansas for the ride back to Dunlap.
Eric B. and Josh C. made goal, with Eric R. Kansas, Me, & Dave, landing within 5-10km. of goal.
My Sat. flight is HERE 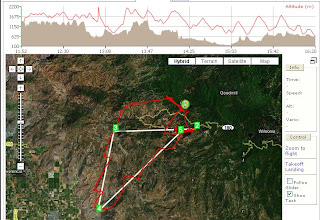 Sunday the task called was identical to Saturday's except that after Bald Pk. we flew to Gage Station and then back to launch & out to the Pizza Place in Squaw Valley. I spent much of the task flying with Andrei A. & Eric R. They were both on Comp wings so I needed to use quite a bit of bar during the transitions to stay with them. Conditions were very scratchy so we spent a lot of time mapping the weak lift. I was able to get a low save off a low ridge while the other guys waited for the next cycle and headed towards the Dunlap valley. I got extremely low over the airstrip and spent 10 minutes in zeros waiting for the release of a decent thermal. Finally I got a kick and then a red-tailed hawk showed me the core of a 500'/min. thermal back to 5000'. This climb got me back to last chance but that proved to be my undoing. I struggled for a while in ragged lift. After 4+ hours, in sometimes scorching heat, I didn't feel like fighting with trashy air low over the trees. I fought the fight another 15 minutes without making any headway towards the Dunlap launch waypoint so I landed & hiked back to the school. My Sun. flight is HERE

Dave, meanwhile, was making a gallant effort. He had flown the entire route solo (a feat in itself-given the day's conditions) and made the Dunlap launch waypoint. He struggled for a while on the way to Squaw Valley before getting low enough that he side-hill landed at the base of hill 49917. I say the base of the hill, but he had a 90 minute hike-out. An epic day for David, he placed 4th for the day.

I really felt good about my flying this weekend. I team flew with one or two guys on comp wings each day and was able to contribute to the team so we all could make progress. I made the decision to continue on solo when it was necessary. The results aren't out yet, but I believe I placed 5th in both of the long tasks.