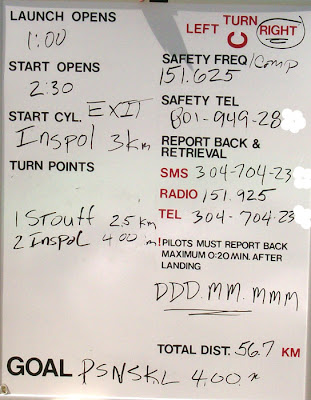 The first task of the US Nats was a 56K task from launch South to STOUFF (12k away) then back to launch, then a 25k leg to PSNSKL.

The conditions didn't develop until just before the 2:30 start time so many were struggling prior to the start. I was fortunate to get a couple nice climbs in the 35 minutes I had to survive before the start. I was in a good position for the start, but not as high as I would have liked. Because I am unfamiliar with the local wx and strategy I was very happy to let about 12 gliders pave the way for me as I headed South along the range. I was able to contact a very nice thermal a couple of K's from the first turnpoint, then headed in to make the point. When I returned to the front range for the return to launch I had no idea that the headwind component, coupled with a large area of oppressive sink, would stop us in our tracks. 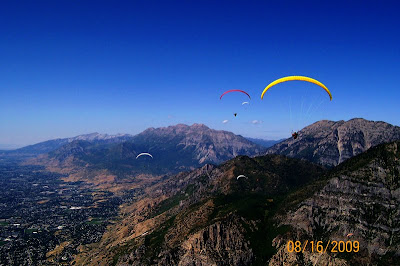 As we approached the canyon which had produced nice lift on the way into the turnpoint, we were greeted with massive sink that required a turn into the wind and resulted in a 2:1 or less glide out to the potential landing options. I hoped for some lift to provide a survival climb but was not rewarded. Many were going into a nice green field at a facility and others were heading for a bigger field with shade at one end and a retrieval van already poised to whisk us back to HQ (not to mention that there were rumors that the vans would have beer - sadly this one didn't).

Once on the ground we did the normal commiserating and were greeted by a couple of young, local girls named Caitlin and Kirstin. They asked the normal wuffo questions and were a treat to talk to. 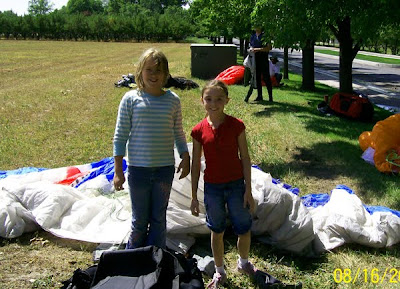 MANY were down in the first 40 minutes of the task - I'd estimate that no more than 15-20 made it back to launch. The last leg had a tailwind but had a sketchy stretch over the flats that may make it tough to get to goal.

Scores will be HERE.

Tomorrow looks like the top-of-climb will be higher. If the winds cooperate we may have a longer task.

Sounds like it is going to be a great week for all of you! Thinking of you!

Nice work Tim, sounds like a tough day (not completely valid), I see many talented pilots near the bottom of the scoring. Beautiful shot of the terrain though. Good luck tomorrow and I hope the weather just gets better and better!

Tim, What is your SPOT url?