WHEW! What a week. Seven straight days of flying. The task committee did an amazing job of working with the weather, winds, and FAA Temporary Flight Restrictions to make the week safe, challenging and enjoyable. In seven tasks the total mileage was 547KM and there was someone in goal every day.

It's late and I'm pooped. so here's the rundown on today: 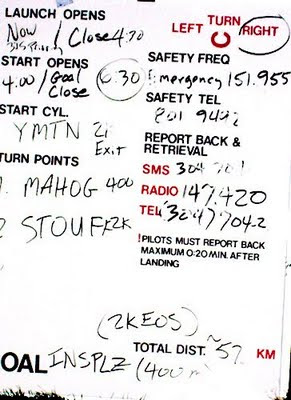 The task was late do to some conversations regarding a TFR North of the Point of the mountain. We flew the revised task above. It was very hot on launch today.

The 53Km task assumed a light west wind. It was a 2Km Exit start around the "Y" mountain, then North to Mahogany. Then we headed South to Stoufer - a school out in the flats.
Then it was a glide to Inspolz. Many had issues down low at various locations, so I opted for the high conservative plan. It worked well all day & I was passing pilots all the way to goal. A high Cirrus layer occeasionally blotted out the sun and having height was gold.

The race went as expected, I placed 14th for the day. Overall, I placed 23rd and took 3rd in the Masters Class and Second in the Sports Class. 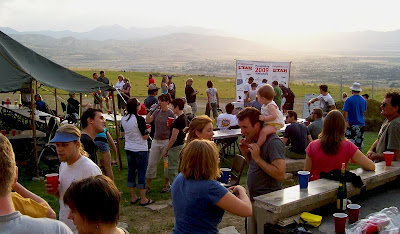 The awards party was held tonight and was a lot of fun with great sides and a roast pig for the main.

After merging the scores for this comp and the 1st round in Dunlap this year, Brad Gunnuscio is the 2009 - US National champion.

I can't even stay awake so get the scores HERE - they will be up ASAP.