Today was the kind of day that I really enjoy flying paragliders. The task was challenging, the terrain was beautiful, and the air was undeniably spanking us all at regular intervals.

A fire South of launch caused a Temporary Flight Restriction (TFR) that precluded our ability to task to the South. This left the only option of flying North along the range. The task committee called a task from Inspo launch 35km to Hounds Tooth Peak, then 18Km South to GOAL at the North Side of Point of the Mountain. 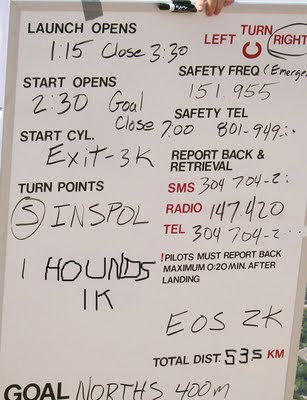 The prevailing winds were from the West along our route but the forecast (and all the local pilots) indicated that we should anticipate the wind to steadily freshen from the North in the latter part of the day. Strategically this put us in a mode of flying X-wind along the range with 5 major canyon crossings with the knowledge that we had to get to Hound's tooth Peak before the North winds kicked in.

The winds at launch were a bit fickle and slowed the launch slightly, but all got off in good form. I got a great start and vowed to stay high on a day I knew would test my resolve to do so. The first crossing to Mt. Timpanogos went well but it was obvious from the greeting we got on the ridge that the day would be a workout. The wind was hitting the sheer rockface and thermals were rocketing up the slopes. They were the kind of lift that is so strong and fierce that you don't really even want to turn for fear of getting a serious spanking. As you can see from my flight track there was some strong lift. As we all sidled along the knife-edge of Mt. Timpanogos we could see hikers on the trails gawking at the crazy guys flying sheets around at 11,000'. The way I was whooping and hollering, I can't blame them for thinking we're crazy. I would have had more photos, but I was afraid to take my hands off the brake toggles. 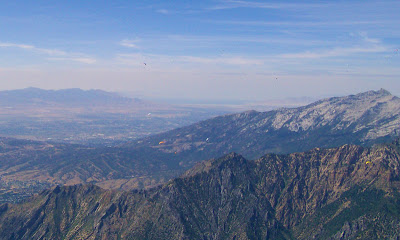 The lead gaggle was screaming along by now (the winners had an average of over 32Km/Hr.) and continued on course. It was from that point on, a day of survival. Knowing when to push; we had that headwind to expect soon - and knowing when to slow down to take a climb so we didn't get stuck in a hole; was what made this task a tough one. I loved the day - It was #2 in my top ten flights. Second only to my flight in the Owens last year, prior to the Nat's there. This flight had it all, wind, gut-wrenching thermals, and tough strategic decisions.

Winners of the day were Josh Cohn who tied with Matt (Farmer) Beechinor. Their times were 1:32 and their average speed was over 32 Km/Hr.
Scores are HERE but here are the cumulative standings for each of the categories:

I placed 16th for the day and have improved my ranking to 25th overall. Let's hope that the forecast for more good weather is correct - I'm having a blast.
Finally, in the 'SEEN AT THE NATS' or 'WHAT NOT TO WEAR FILE,' is a photo of our beloved Nick Greece in his unmistakeable flying attire - 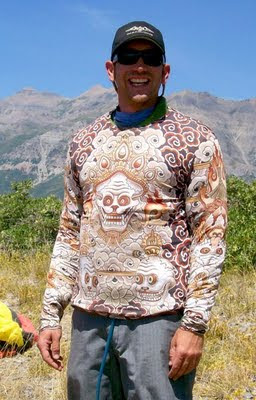 Fly safe out there -
Tim

P.S. There are a couple of other quality blogs out there. Try Brett's Blog: http://ridethecore.com
and Andy's Blog: http://web.mac.com/macraeandy
Posted by Tim at Tuesday, August 18, 2009
Email ThisBlogThis!Share to TwitterShare to FacebookShare to Pinterest
Labels: 2009 Paragliding Championship, 2009 US Paragliding Nationals, Inspo

Way to put one in goal, sounds like my kinda day out there too. Good job battling it out! Keep the updates coming!