The weather forecast for today was not much different than yesterday's, but it felt very different at launch. It was noticeably warmer with less breeze and cycles seemed very weak. Forecast winds were from the West generally, with the normal Northern flow in the afternoon. Top of lift was forecast to be 10 to 12,000'. 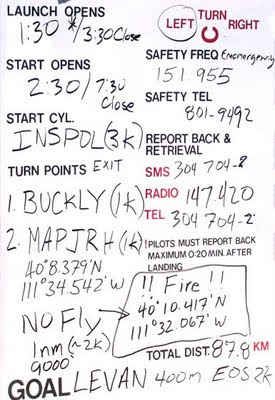 The TFR that restricted airspace over the fires to the South had been modified to only one mile in radius, so we tasked to the South again. The task was an 87Km. task from Launch 10K to BUCKLY, then 8K to MAPJRH, then 69K to LEVAN. 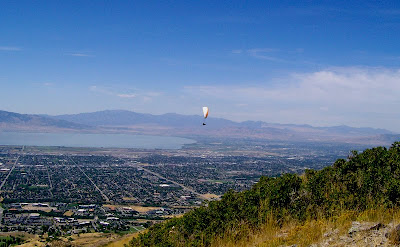 The launch queue was slow to file off the hill due to less than encouraging climbs by the early flyers, intermittent lulls and occasional back-winds at launch. Eventually we all got into the air for the start. Many were very low for the start but proceeded down range anyway. They were rewarded with nice climbs that put them back in action. The lead gaggle had specked out and were into the NW winds, using the additional tailwinds to make quick work of the first 2 turnpoints.

American Canyon, a wide expanse with large wind generators strategically located in the mouth of a venturi canyon, was the first real crux for most of us. In my case, I found myself groveling at 300-400' AGL, trying to get up while baking in my cold wx gear. I was HOT, LOW, and UPSET, much of today's flight. I guess I gushed a bit too much about yesterday's flight and this was my payback. Those that made it by the wind generators were stuck on a West facing ridge with North winds. It was very hard to get past Payson, and many did not. Those that did get up had a nice downwind leg to goal but it was not an easy flight and many landed along the course line.

We had 11 in goal with Mads Syndergaard first and Matt Senior second and Brad Gunnuscio third.

In spite of the fact that I placed 35th today, I'm in 26th overall.

The temps are forecast to get warmer and climbs to get higher. It may be time to dust off the O2 bottles. I'm looking forward to the next 3 days of flying.