Winds were forecast to be light and variable today. The task committee took this info to heart and set a task that would separate the men from the boys. Those who completed the task would hold the new Utah State record and site record. 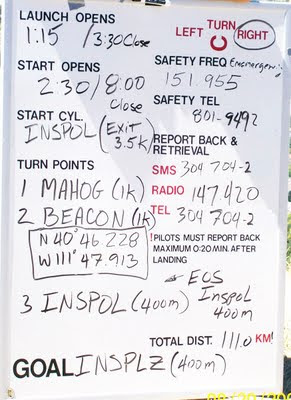 The task called was a 111Km. out-and-return flight from Inspo launch to Mahogany Pk. to Beacon Hill (above UOU in SLC) and back to Inspo Launch.

The conditions before start were more lethargic than usual. With 30 minutes before the start, only 1/3 of the field was in the air and many were below launch height. Those that were at the top of the available thermals were only 1000 to 1,500' over launch, bouncing off the inversion. 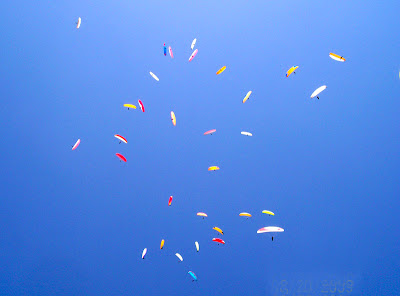 I launched late, about 1 minute before the start, and was able to get just enough height to cross the canyon and work the low hills in front of Mt. Timpanogos. I had hoped to fly along the Timpanogos ridge and take some photos that might give some idea of the beauty of the area, but instead I was bouncing along below 7000' in the hot air with my buddies. 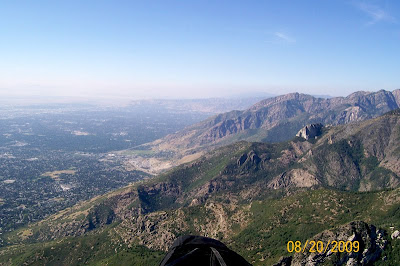 As we inched North, the climbs became more substantial and higher. Eventually a rhythm was set and the gaggle continued to leapfrog from climb to climb working loosely together to cover the 30 miles to the turnpoint before the North winds picked up.

In the canyon just South of Lone Peak, I made a bad decision and found myself setting up to land at the bottom of the canyon near some outlying homes. At 400' above the ground I aimed for a possible trigger - sure enough, there was some weak lift. I stayed in the area with light lift that averaged slightly more than zero sink for 5 minutes or so, when a hawk appeared to my right and 40' above me. He was circling in lift and out-climbing me so I moved over to him - talking to him and thanking him for his help in finding the core. We worked our way from 7600' to 12,000', all the while he was 40' above me. At the top of climb, he folded his wings and dived to the valley floor as if to say, "From now on you're on your own." This climb made the Lone Peak crossing possible and paved the way to make it to the turnpoint at Beacon Hill.

It was at Mt. Olympus that I was passed by the leaders as they began their flight back to the Inspo launch, 45Km away. I was getting tired by now and became fixated on making the turnpoint without really considering my options after making the turn. Bill Belcourt and Chris Galli were 1/2 mile ahead of me and I followed them, passing up a bit of essential lift, to tag the turnpoint. Bill was able to make the low save off a low finger but the rest of us dirted a few km South of the turnpoint after tagging it.

There were three pilots in goal and another 12 pilots within 5km of goal. Considering the day it was a spectacular display of talent and tenacity.

Scores are HERE but here is the rundown of the top 5 in each category after 5 tasks:

My flight track is HERE. I placed 35th today which has further lowered my standing to 28th overall. I'm having fun and learning a lot. Two more days of flying to come.